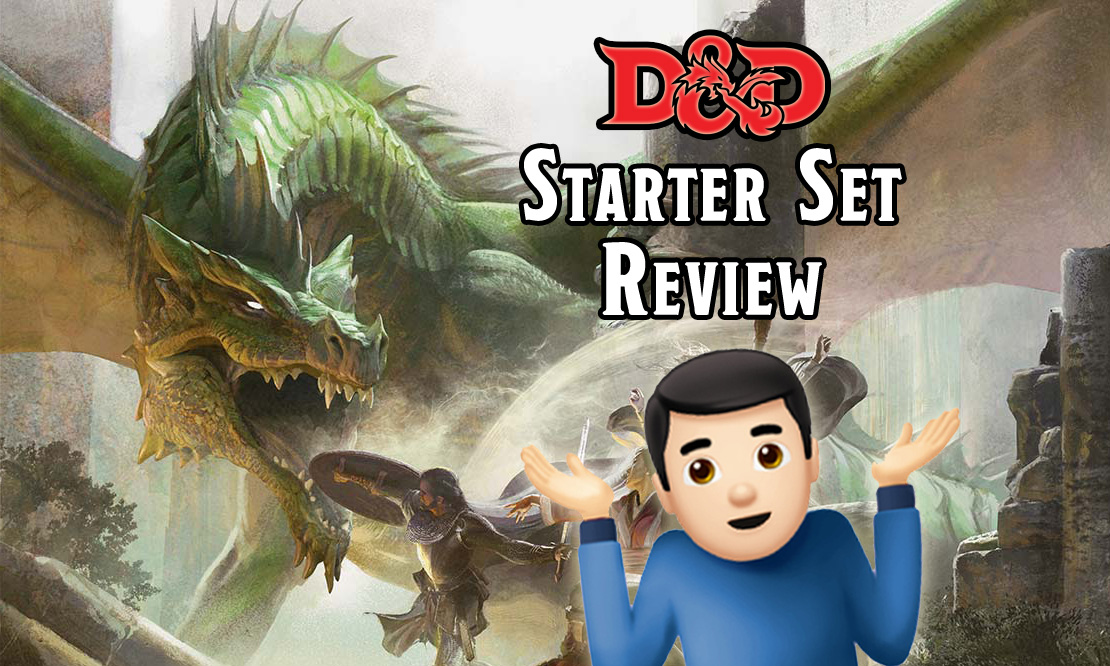 New to Dungeons &Dragons? Introducing someone new to Dungeons & Dragons? Wizards of the Coast has published a product with just you in mind. The D&D Starter Set offers simplified rules and a self-contained adventure, “Lost Mine of Phandelver,” and claims to be the perfect entry point for beginning players.

That’s a tall ask. Throughout its publishing history, Dungeons & Dragons has had 3 core books: the Player’s Handbook (PHB), Monster Manual (MM) and Dungeon Master’s Guide (DMG). That’s 90 dollars and 988 pages (we counted; we’re like that) of concentrated geek. The PHB alone, historically considered the bare minimum to run a game of D&D, is twice the price and four times the length of the Starter Set.

So is the Starter Set a no-content cash grab aimed at new players? Or does it succeed as an entry point for new role-players?

When we cracked the plastic on the “D&D Starter Set,” a few qualities stood out.

In fact, our first thought on the Starter Set came well before it shed its plastic shell. That thought was “good grief, this is cheap.” At around 20 dollars, the Starter Set is substantially less expensive than even one core book. It’s not just the rules and the Lost Mine of Phandelver adventure, either. It also comes with 6 dice and 5 pre-generated characters. By tabletop gaming standards, that is a whole lot for very little. OG gamers routinely spend more than the price of the entire Starter Set on a single set of dice.

To be honest, that concerned us. On opening the written assets, we were concerned whether we mightn’t have just bought a glorified ad, a pamphlet with just enough substance to hook folks, especially kids into buying the big books. 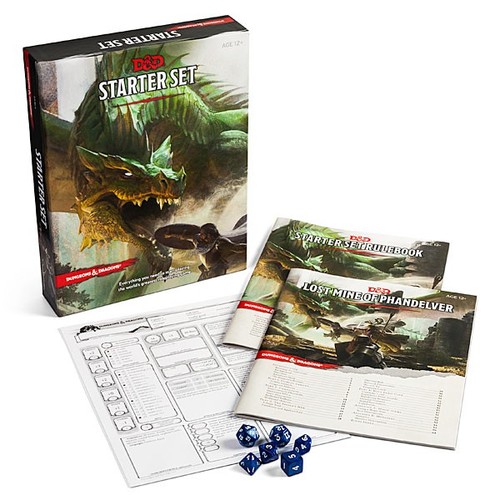 When we cracked open the book, we were pleasantly surprised. If anything, the Starter Set erred on the opposite side of the literary candy floss we were dreading. The first thing an experienced gamer notices about the Starter Set is how focused it is.

… with a Sweet Finish

In tabletop game design, the conventional logic has always been that rules need a bit of literary sweetening to keep readers engaged. The PHB abounds with flourishes like suggested character concepts and quotes from well-known characters. Even the infamously dense DMG, written as a reference text for people running large, involved campaigns, has flowery touches here and there.

Not the Starter Set. Yet – we’re verging on heresy here – we found it more readable than the core books. The Starter Set takes as its central principle the idea that the reader just wants to start playing. It ditches fantasy flourishes and lays down the law in simple, conversational style. If you don’t know what a Difficulty Check is, the difference between Intelligence and Wisdom, or when to allocate a bonus as opposed to granting advantage, this book will sort you out.

The clean, straightforward presentation of the D&D Starter Set does come with one downside: it’s pure crunch. In tabletop gaming, “crunch” is a game’s rules and structure; “fluff” is its narrative and creative aspects. The ruthless focus of the Starter Set on the nuts and bolts of D&D will absolutely help beginners get a game going fast.

But fluff exists for a reason. Role-playing is all about creativity. The Starter Set pays lip service to that, but it doesn’t commit serious text to helping readers build unique characters or campaigns. You’ll have all the rules for a barbarian. What you won’t have is a pantheon for your barbarian to worship, or pre-written cultures they might come from, or tips on choosing a name. The PHB shines in that regard: its Traits, Ideals, Bonds and Flaws set the standard for customization.

Running a game with the Starter Set doesn’t require players to use the pre-generated characters, but new players are likely to struggle to make their own. That takes some of the fun out of D&D.

The included adventure, The Lost Mines of Phandelver, is an excellent choice for new players and DMs alike. The plot is engaging, if not astonishing, and the structure suits the Starter Set’s pre-written characters. For new DMs, running this adventure is made very easy with tips and suggestions on how to play out various sections but still with wiggle room to DM in your own style.

We only have two caveats regarding the Starter Set’s included adventure. First, it’s big. Expect to play multiple nights if you want to complete the story and fell the dreaded Nezznar. That’s standard for D&D adventures, but if you’re committed to a one-and-done story, there are better options on the market.

Second, once Lost Mine of Phandelver is done, it’s done. There’s limited replay value here. If you’re looking for thrilling storytelling you’ll want to revisit again and again, consider the Mad Max madness of Descent into Avernus or the sinister Curse of Strahd.

Detailed location maps, descriptions and monster stat blocks are all included in the adventure booklet

Let’s start simple: the D&D Starter Set is absolutely worth 20 bucks. That’s the important question, and there’s no doubt in our minds. But let’s drill deeper.

Our main reason for recommending the Starter Set is simple: you could bring this sucker out at a game night with family and friends who have never played Dungeons and Dragons, and play a session with no more difficulty than you’d have with a new board game. That’s unprecedented. There are D&D-themed board games, certainly, and it’s always been possible to pull together a scrappy one-shot with experienced players. The Starter Set goes beyond that.

It’s real D&D, the full experience, simplified elegantly enough that complete noobs can play and have an epic adventure almost straight away.

The First Taste is Always Free

We’re comfortable saying that the Starter Set is more than the “hook ‘em, then reel ‘em in” bit of marketing fluff we’d suspected in the beginning. At the same time, Wizards of the Coast is a business and knows exactly what it’s doing. The Starter Set exists to win converts. If you enjoy playing it, it won’t be long before you start looking for more depth and customizability than it offers. When that day comes, get the big books.

This is a special moment in tabletop gaming history. It’s never been so mainstream. The D&D Starter Set isn’t exploiting that fact. It’s serving it. An inexpensive way to join and enjoy the hobby is exactly what’s needed right here and right now. There’s not much in the Starter Set for established players, but if you’re looking to get people excited about Dungeons and Dragons, it’s exactly what you need.

The D&D Starter Set and official Icons of the Realm starter miniatures can be purchased separately from Amazon.com

Looking for the alternative way to get into D&D? Read our review of the official D&D Essentials Kit which packs even more of what you need into one affordable package!