Do Paladins Have To Be Lawful Good in D&D 5e

Do Paladins Have To Be Lawful Good in D&D 5e

Paladins are members of a religious order dedicated to fight evil wherever they find it, considering that there are a lot of evil creatures and evil deities in D&D that demand evil deeds to be done on earth. In fact, the whole alignment system is set up to know which creatures are evil or not.

The problem with these heroic religious warriors is that they tend to have one alignment: lawful good. While this is a noble endeavor to pursue goodness to the word of the law, it can be a little stifling for your character.

Entirely lawful good or evil characters are interesting and can be brilliant, but in games where the events and characters are morally gray, it can be difficult to navigate.

So, do all Paladins have to be lawful good? Or can you deviate from the path?

What Is A Paladin?

In terms of D&D, a Paladin is basically a holy knight and a hybrid between a Cleric and a Fighter. It tries to walk a tightrope between the two, being as able in close combat as a fighter, but also able to heal and provide spell support like a Cleric.

While a Paladin is not the better than either of these classes in their chosen fields, the fact that they are able to do them is a fantastic bonus to a party. It is also one of those classes that can do solo quests in almost any given situation, thanks to this jack of all trades mentality.

Paladins are completely devoted to their god, their cause, and the codes that they themselves follow. Without them, they are not a Paladin, and they are not granted any magical boons that a god may otherwise bestow. 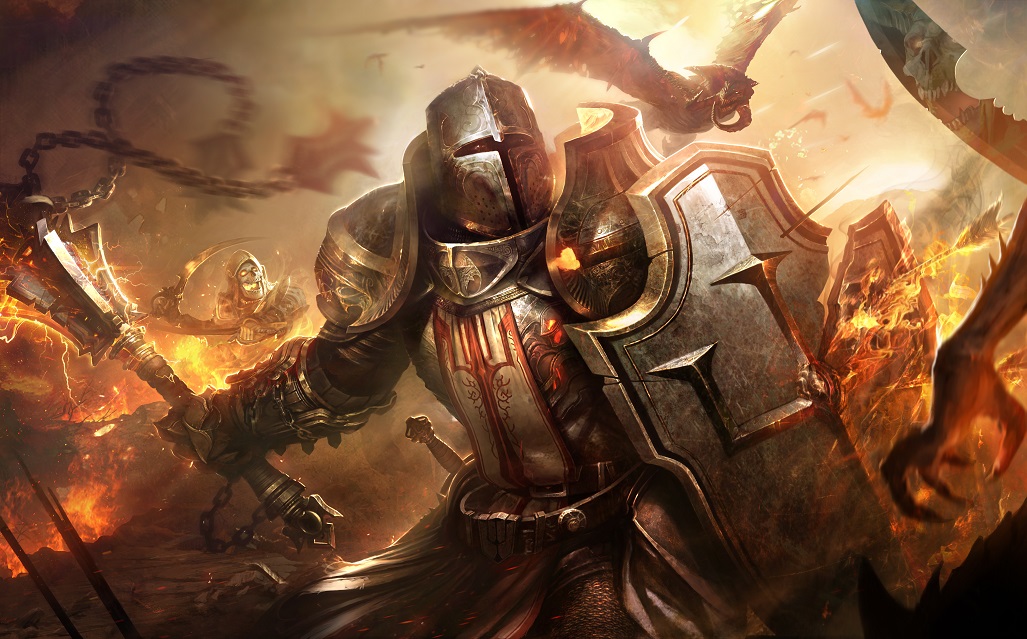 Why Are Almost Universally Lawful Good?

For the exact reasons we gave above: their god, their cause, and their codes. In order to receive boons and magical powers, Paladins are granted them by their god. In order to be worthy of their god’s gifts, they must be strict in not only upholding their god’s code of conduct, but their own.

As Paladins have to follow their codes, they would come under lawful in alignment. Alignment is basically how your character interacts with the world and people.

Those that are lawful will follow the laws and codes of the land – whichever land it may be – those that are chaotic follow their own beliefs and thoughts whether they are in keeping with society or not, and those that are neutral hold no particular regard for law or chaos, respectively.

The other aspect of alignment is good, which are morally just actions, evil, which are amoral selfish actions, and neutral, which holds no particular regard for good or evil respectively.

As Paladins have codes and rules to follow they are lawful by default most of the time and because there are few truly neutral goods, that leaves lawful good or lawful evil.

Since most of the large cities and settlements in D&D do not have a tolerance for evil gods or deeds – although some places like the Underdark do – it would be difficult for a paladin serving an evil god to actually even enter one of these places.

As such, they tend to almost always be lawful good.

What Happens If You Are Not Lawful As A Paladin?

Unfortunately for Paladins, there are consequences for deviating from your codes. At 3rd level, Paladins will take a feature called Sacred Oath. This is where a Paladin swears themselves to an Oath, which binds them to their codes, their honor, and their god until their dying day.

While there are other oaths a Paladin can take, the most common one is the Oath of Devotion, which means that a Paladin must adhere to tenets of honesty, courage, compassion, honor, and duty. Breaking any one of these tenets directly will be a direct violation of your oath and if you can’t plead your case or are not sorry for what you have done, the consequences could be dire.

The consequences are mostly up to your Dungeon Master, and they may have you run a gauntlet to prove your worth, but the final and most damning thing they can do – which is listed on PG 86 of the Player’s Handbook (top right box) – is to strip them of their Paladin status.

What Other Oaths Are There?

There are two other oaths that a character can take in the Player Handbook. The first is the Oath of the Ancients. This oath emphasized all things good over the tenets of law and chaos, and so can work well with any character that has a good alignment.

It doesn’t matter if what you are doing is within the bounds of the law, as long as it is morally right. This is a nice workaround to having to follow the law or code to the letter, as the only really upheld code of the Oath of the Ancients is ‘be good’.

The other oath is the Oath of Vengeance. The codes of this oath are more about hunting evil, by any means necessary. As such, they do not need to follow laws or society’s rules to do so. The Paladins that follow this code aren’t even necessarily good, as their purpose necessitates that evil be destroyed, come hell or high water.

There is a third potential oath held by Paladin, though it is really defined by the oath that was broken. These are the Oathbreaker Paladins. Not all Paladins who break their oaths and stripped of their Paladin status are Oath Breakers, most in fact are not. Oathbreaker Paladins are those who have not only fallen from grace, but have done so to serve evil or an evil power completely.

These Paladins actively work against the oaths of their former gods, by serving their new masters with a newfound loyalty.
There are other unofficial oaths to follow if you want for your Paladin, or you can make your own. Remember that the supplements and guides that D&D can be taken as gospel or as just a guide to use. 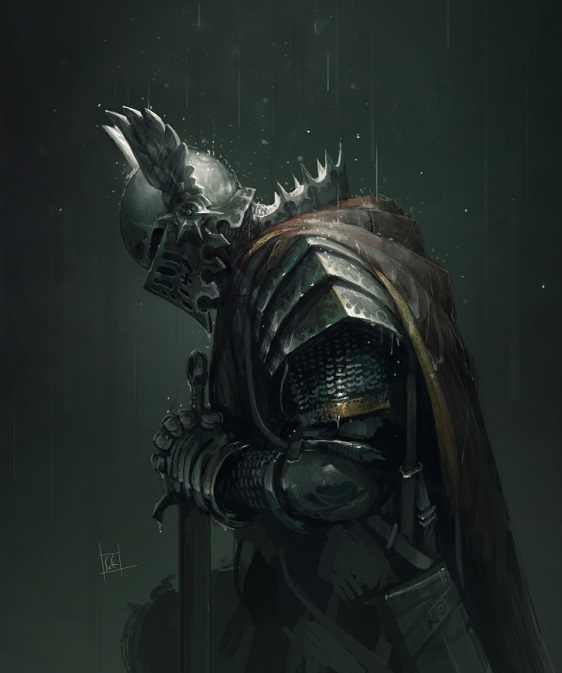 Backstories For Paladins Who Are Not Lawful Good

So, how do you create a backstory for a Paladin who is not lawful good, without losing their Paladin status?

These types of questions and the answers that people come up with are the essence of D&D. The backgrounds that characters have and the stories that are created in game are some of the most compelling and, often, some of the most tragic.

What should a Paladin, sworn to protect people, when a noble is misusing their power, but within the bounds of the law? What happens when a Paladin finds a friendly and kind goblin, a creature unsparingly bound to an evil god not of its own choice? These questions are the emotional turmoil and drama that will make your stories memorable.

For, characters that are bound unflinchingly to either the ideals of Lawful or Chaotic and of Good and Evil typically create the most dramatic moments in the story when faced with a morally gray decision or something that conflicts directly with their codes in a way that benefits them. Here are ways of exploiting these backstories and creating drama with them.

As we mentioned earlier, using the Alignment system is a perfect way to add tension to your story. You could constantly bring up scenarios that make your Paladin question their beliefs in what they do.

For example, a Paladin who is neutral good is watching an execution. The man about to die stole food to feed his family, but only because he had been unfairly dismissed from his job by a cruel and vindictive noble, the same one who is having him executed.

On the flip side, an evil Paladin who chose this life as part of a promise. They really don’t care about the tenets or the church, but they made a promise to one of the few people they care about, and they want to keep it. Have them struggle with their nature in life and in battle.

Have them struggle with not fighting dirty, if it wins you the fight, what does it matter? Make them pragmatic to a fault and reason out your character’s struggles, while remaining confused about why they should follow these codes.

We don’t know the answer to these questions of morality, only the player can answer it, but no matter what happens this event will define the Paladin, the character, and their story, which is precisely what you want. 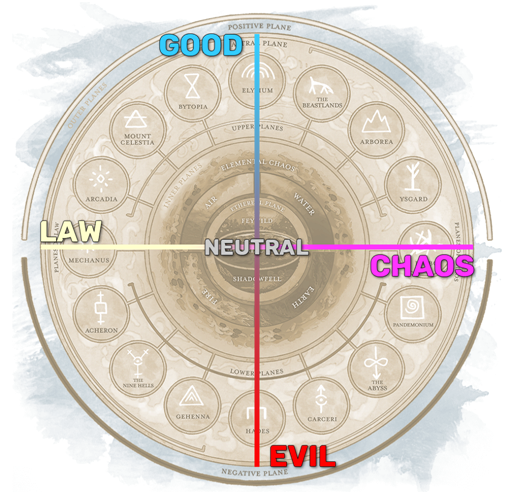 What Is Good And Evil?

In D&D, good and evil are concepts that are applied to a lot of creatures and characters. However, it should be noted what these truly mean, as some things are listed as evil or good that seem wrong or silly – for example, a brainless skeleton is evil, but it doesn’t think it just does what it has been told.

With that in mind, you could work around the codes of your character by prioritizing a code over another or by your character’s own definition of good and evil. For example, a Paladin could be an amazing anti-villain, someone who does terrible things for the right reasons.

An anti-villain player character could betray the party at a crucial moment and lock them away inside a burning church, so a terrible secret is not revealed.

Alternatively, a Paladin could turn away from their god but not their codes, believing that their god abandoned the codes and that by turning away, they were only fulfilling their duty. Your definition of good, evil, and the gray in between can give you a lot of leeway with the laws and codes and make your character incredibly compelling.

The constant struggles they would go through, as they realized that concepts such as good and evil are not as clear-cut as they thought, and the ways in which they reconcile themselves with this knowledge and the burden on their shoulders could be one of the most amazing characters that you create.