How Many Spells Can A Druid Prepare in D&D 5e?

Home/D&D/Player Guide/How Many Spells Can A Druid Prepare in D&D 5e?
Previous Next

How Many Spells Can A Druid Prepare in D&D 5e?

Druids are the most versatile and diverse class in the game, because they are able to use spells to help in various situations. However, this does not mean that they can just get out of any trouble easily, and there are limits to their powers that players must abide by in-game.

All players are bound by rules that keep things as fair as possible and promote maximum enjoyment; to what extent can Druids prepare for every eventuality?

You can only prepare a specific number of spells at any one time, which means you must choose carefully. We’ll talk you through the ins and outs of Druid spells, including what is meant by a prepared spell, as well as brief spell descriptions if you want to learn more.

Although it’s a lot of information, it will hopefully help you to understand more about your class and certain things that can benefit Druids specifically in the game.

As we have mentioned, a Druid is just one class you can choose for your character creation. It is a spellcasting class, which means that a Druid character has spellcasting ability, a spell level, and a specific Druid spell list that they can use. They are different from other classes that are familiar with casting spells, such as wizards, sorcerers or warlocks.

The main thing that distinguishes Druid class features from the rest of the classes with casting ability is that they are known as divine spellcasters. This means that their spellcasting ability comes from a strong connection to nature or some kind of nature deity.

This could be anything from using wild animal companions to channel power from beasts, to drawing on natural energy like a druidic plant spirit.

While certain classes like sorcerers and artificers can use arcane spells, Druids have only divine spells that they must prepare. An arcane spellcaster has an innate ability to control elemental forces, whereas only a robust bond with nature can allow divine spellcasters to harness magic. In this way, Druids can be seen as nature wizards, as they have power over the forces of nature.

Thanks to their nature bond, Druids have access to a wide variety of divine spells called Druid spells. These are spells that a Druid knows and can cast, but they do not necessarily have to come from the Druid spell list.

Instead, they may be exclusive spells that you discover as you play, which you can then add to your own arsenal of spells. In addition, you may gain access to the list of Wizard spells, including the Alter Self spell.

What Spells Can Druids Use?

There are two types of Druid wild magic spells: cantrips (which are free) and ritual spells. Cantrips are used when you don’t have enough time to perform an entire ritual spell, so it is usually something quick and easy to cast. Ritual spells are performed over several rounds, as opposed to a single action.

Access to ritual spells requires concentration, meaning you cannot cast them while doing another task – this is known as Druidic Focus.

Druid cantrips are available at all levels, and they work much like the spells of other classes. You can cast them whenever you need to, but once per short or long rest, you must make a Wisdom saving throw against your spell save DC.

If you fail, you suffer disadvantage on attack rolls, ability checks, and saving throws until the end of your next turn. When you reach 4th level, you gain one additional cantrip of your choice.

Finally, when talking about Druid spell lists, you should know that some of the Druid spells are unique to each subclass. For example, Cleric Druids have access to a special prayer spell called Divine Word, but no other cleric spells. A Wizard Druid will have access to the same amount of wizard spells as other Wizards, but they are all considered Druid spells.

Does The Number Of Spells Change?

As a Druid, the number of spells you can learn is determined by your current level (as shown below) and the total amount of spell slots available to you. For example, a 1st level character has 3 slots in which to prepare spells. This then increases incrementally, so that higher levels have both more spell slots and higher spell slots that make the spells more effective.

You could have as many as 9 spell slots if you had 2 levels left over from another class or race. However, even with all nine possible spell slots, you could only cast three different spells per day. This number increases to four if you have two more levels left. At higher levels, you will be able to prepare more spells, though this increase is still capped at 9.

What constitutes a ‘day’ is up to the discretion of the DM; you may decide to play just one day at a time, or there could be multiple in-game days over the course of a single session. The DM will let you know when a new day has started, at which point your spell slots refresh and you once again have the full complement of spells for your level available to you. 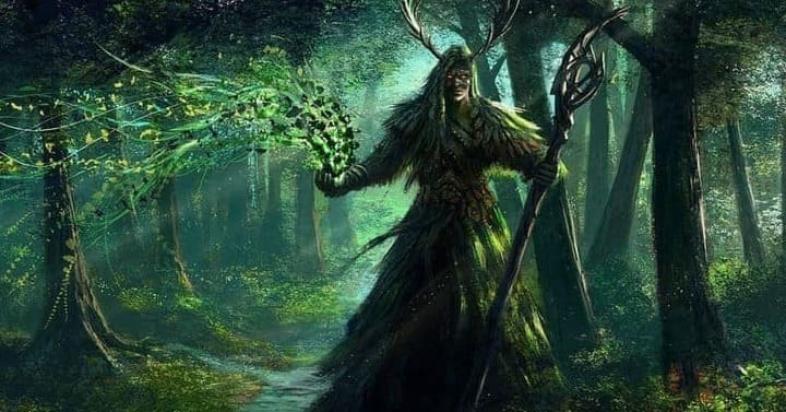 Once you get to 2nd level, this increases to 3, plus the same two cantrips. You can also begin using Wild Shape functions, which let you take on a beast form of your choosing. All spell slots up to and including this point are 1st level ones.

When you’re at 5th level, you can use 3rd level Druid spells, as you gain 2 slots for 3rd-level spells. This is also the point at which your proficiency bonus improves, so you can add 3 to your attack rolls.

6th level has one more 3rd level spell slot available, and you achieve your first 4th-level spell slot when you reach 7th level. You gain additional Druid cantrips from 10th level onwards, but you can never have more than 4.

As you can tell, you gain another spell slot level for every other character level you get to, up to and including 20th level.

You can level up by completing adventures and gaining experience points, although the majority of players won’t ever reach a 20th level class ability because campaigns aren’t typically long enough. If you want a full breakdown of spell slots per level and a comprehensive list of spells, see this table.

Just looking at an explanation of how much ritual casting you can do as you progress can be very confusing, not to mention all the additional benefits you may get, like Wild Shape and Druid Circle. These additional features are embedded into the game to reflect how your character’s mastery over nature improves with more experience.

After all, the Druids’ attunement to nature is what allows them to be divine spellcasters in the first place. While their casting time is longer than classes who have innate magic, the nature bond they cultivate is strong and can be seen as primal magic. A Druid can summon nature to aid them with tasks, and even bring the wrath of nature down upon their enemies.

A Druid can prove to be a very useful member of your party, and it’s best to have different characters so that you have a wide range of alternate class features between you.

Of course, the higher your current level, the more divine spells are available to you, as your spellcasting focus becomes more concentrated. Your allotment of spells increases in versatility, allowing your attack spells and healing spells to be more powerful.

The easiest way to get your head around all the changes and rules regarding Druid prepared spells is simply to play, and learn as you go along – this way, you don’t need to keep too many details in your head at once and risk getting them muddled up. In any case, it is fun to discover new limits to your character’s abilities with each adventure you embark on.