Star Wars D&D – A Match Made in Nerd Heaven

Star Wars D&D – A Match Made in Nerd Heaven 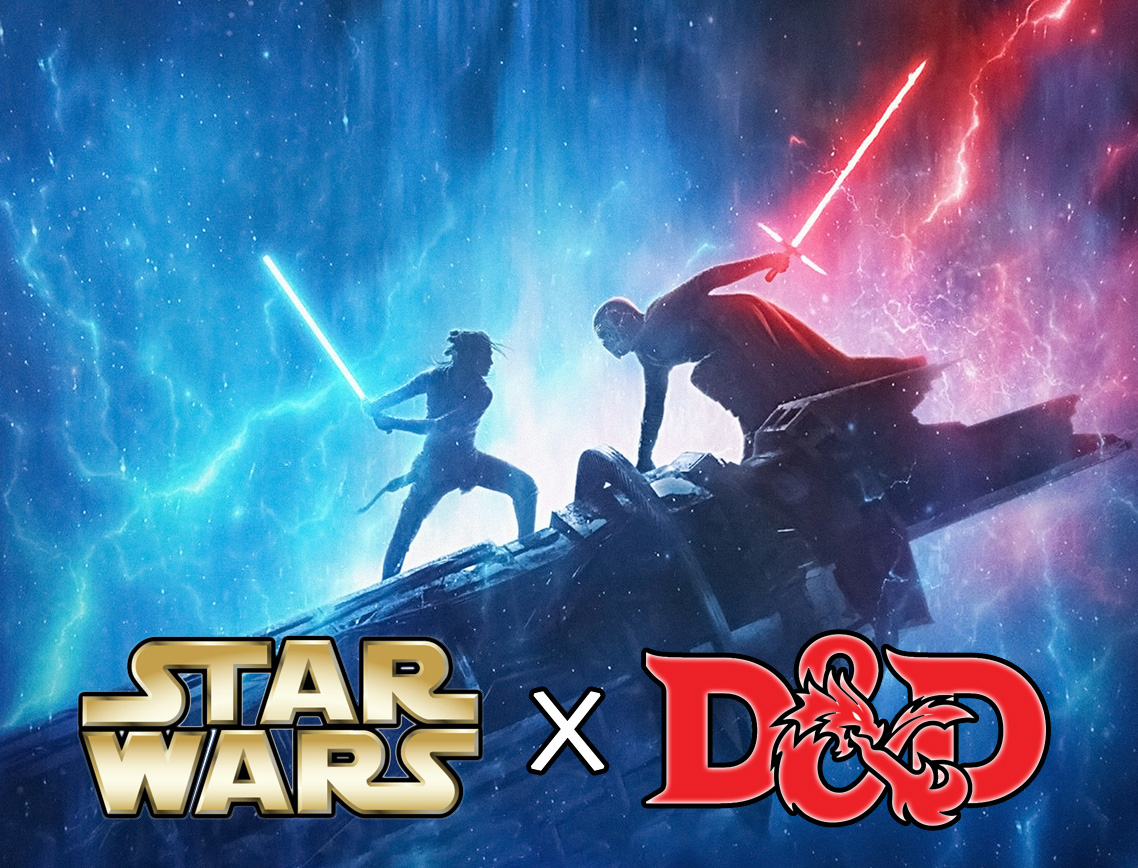 With the release of Rise of Skywalker, the last episode in the Star Wars saga, hype for the legendary sci-fi franchise is now at fever pitch. Similarly, Dungeons & Dragons is undergoing its own massive uptake in popularity in recent times and interest in the game has never been higher.

While they may occupy completely polar opposite settings, both the Star Wars and D&D franchises share an awful lot in common. Both beginning in the 1970s, they have grown in popularity over the years with many generations falling in love with the spirit of adventure and epic tales told in both. Both also have decades-worth of lore, characters, worlds and settings to draw inspiration from. Not to mention that they have both had huge impacts on popular culture and would have a massive overlap in their fan-bases.

If only there was a way to combine both the Star Wars and D&D universes together to create the best Sci-Fi TTRPG you can imagine? Well luckily there a couple of ways you can do just that.

Officially, Fantasy Flight Games has created an licensed Star Wars TTRPG, released in 2012. It consists of three different standalone games, each one conceived to play a particular type of character:

While this source material provides a great way to role-play within the Star Wars universe, it requires the GM and players to learn an entirely new game system (and even have to get their set of proprietary dice). This can be a bit of a barrier for those of us who want to just play with what they already have and also don’t want to change how they play.

An even better solution for D&D players wanting to try the Star Wars universe (and what we whole-heartedly recommend) is to check out Star Wars 5e.

Star Wars 5e is a full conversion of Dungeons and Dragons 5th edition to the Star Wars universe. Not just a simple re-skin, the team behind SW5e have put an enormous amount of thought into adapting the D&D 5e system to make it as easy to pickup as possible for those familiar with D&D 5E.

There is no need to learn an entirely new game system and you can use the dice you already have. If you know how to roll a d20, you’ll be able to start playing SW5e right away.

Care has been taken to stay true to the Star Wars lore and canon and yet all the information you need about races, classes, worlds, skills, abilities and items are there for you to create your own epic galactic adventures.

So why not take a break this week from stabbing goblins and blast some storm troopers instead?

All the source books for Star wars 5e can be found available completely free on their official website.

BONUS TIP: let’s face it, you may as well use this as an excuse to pick up a new set of galaxy/nebula themed dice.

If you’ve never played Dungeons & Dragons and this article has piqued your interest, enter the Tavern to find out exactly how to begin your journey and what you need to start playing Dungeons and Dragons.